On September 28, the National Cultural Heritage Administration announced the major archaeological discoveries of Zhouqiao Bridge in Dongjing (now Kaifeng city of Henan province), the capital of China's Northern Song Dynasty (960-1127), unveiling the historical changes of the urban areas of Kaifeng and the progress of the Chinese nation.

The ruins of Zhouqiao Bridge along the Bianhe River in Kaifeng city. [Photo provided to dahe.cn]

By July 2022, 4,400 square meters of the ruins of Zhouqiao Bridge along the Bianhe River in Kaifeng city have been excavated with 117 remains from different dynasties unearthed, including river course, water conservancy facilities, bridges, roads, temples, houses, sunken ships, wells, storage facilities, cooking benches, ash pits, etc. At the eastern side of the ruins were discovered the course and embankments of the Grand Canal (the Bianhe River section) of the Sui (581-618) and Tang (618-907) dynasties with clear stratigraphic texture. In the river course were also found shipwrecks of the Song Dynasty (960-1279) and timber piles of the Yuan Dynasty (1271-1368). At the western side of the ruins was found a relatively well-preserved Zhouqiao Bridge of the Ming Dynasty (1368-1644) with a bluestone bridge deck, a brick arch and stone abutments. Parts of the embankment of the Song Dynasty have been found to its east on which are reliefs of sea horses, auspicious beasts, cranes and auspicious clouds with an average height of 3.3 meters and a total length of 25 meters. Also, the remains of a river god temple of the late Ming Dynasty, an important part of canal cultural heritage, were discovered around the bridge deck and the river course. 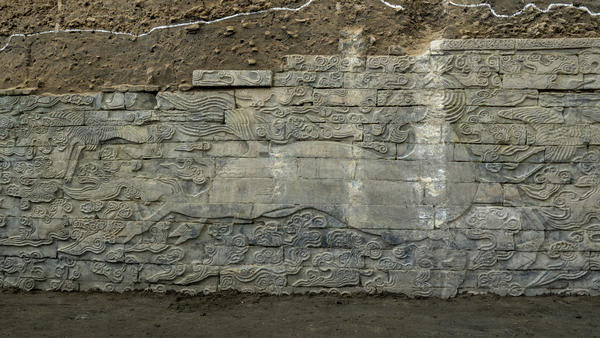 Part of the embankment of the Song Dynasty. [Photo provided to dahe.cn]

More than 60 thousand cultural relics have been unearthed from the ruins, including over 56 thousand porcelain wares, 1,800 pottery wares, 1,000 copper coins, 200 bone implements, 100 bronze wares, 50 jade wares, 50 stone tools, 30 iron wares, etc. The blue-and-white porcelain of the Ming Dynasty accounts for the largest proportion of all the porcelain varieties followed by the one with black flowers and white background of the Jin (1115-1234) and Yuan dynasties. Other varieties include white porcelain, bluish-white porcelain and celadon wares printed with decorations of the Song and Jin dynasties, Longquan celadon wares and Jun porcelain of the Jin, Yuan and Ming dynasties, and blue-and-white porcelain, five-color porcelain and famille-rose porcelain of the Ming and Qing (1644-1911) dynasties. Most of them are daily utensils, including bowls, plates, cups, calices, pots, cans, bottles, basins, stationery and toys. Apart from bone implements, a large number of human and animal bones have been found, too. In the flood-caused sediment deposition of the late Ming Dynasty are scattered human bones, while in the normal sediment deposition are animal bones probably thrown away by people at that time. In addition, 3 gilt-bronze statues ranging from 80 cm to 100 cm in height have been discovered near the river god temple, which are extremely rare and precious. 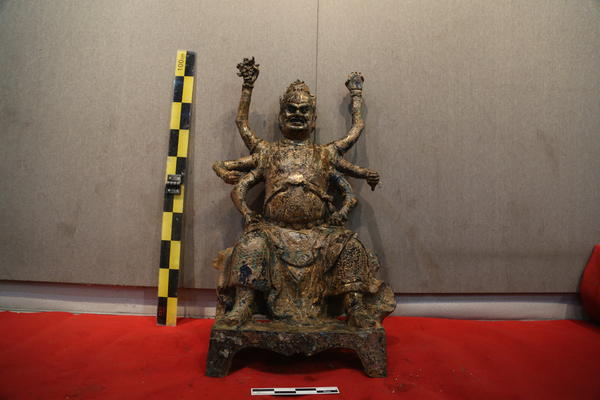 One of the three gilt-bronze statues discovered near the river god temple. [Photo provided to dahe.cn]