On August 5, a news briefing was held by the Information Office of the People's Government of Henan Province to introduce Henan's efforts to advance the construction of a modern logistics system. 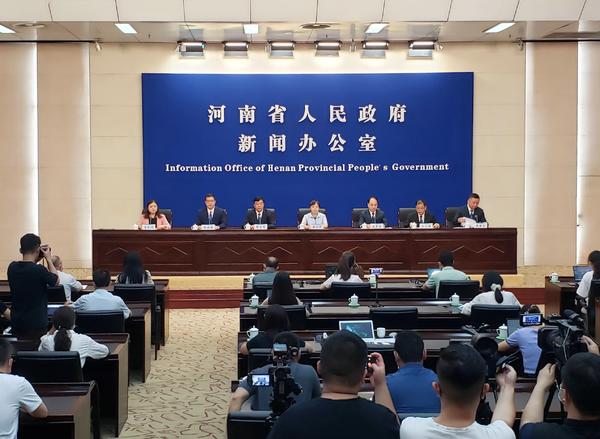 The news briefing. [Photo by Shen Hua for dahe.cn]

Henan has kept working on the construction of "one network and two corridors" to form a comprehensive logistics network connecting domestic and international markets, said Wu Jingshun from the Department of Transport of Henan province at the news briefing.

A modern comprehensive transport network has been perfected. Henan has accelerated the construction of major projects in railways, civil aviation, expressways, and inland waterways by implementing a series of key projects, such as expanding high-speed railway network, strengthening civil aviation hub with more routes, commencing "13445 Project" for expressways and making its waterways connected with China's major rivers and seas. So far, the comprehensive transport network of Henan has reached 280,000 kilometers with the construction of China's first 米-shaped high-speed railway network with Zhengzhou at its core completed, not only promoting the development of Central China, but also the whole nation. Four vertical and five horizontal routes of Henan's normal-speed railway network have been all electrified. The civil aviation industry has been developed into the one with one hub with three spokes. All the counties and county-level cities in Henan have been accessed to China's expressway system with all its high-speed railway stations, airports, ports and provincial-level development zones connected by second-level (or above) highways. Henan's two waterways (Huaihe River and Shaying River) have been linked with major rivers and seas. That is to say, a comprehensive transport network has been basically formed with high-speed railways and expressways at the core, standard railways and highways as the foundation, and waterways and airways giving full play to their roles, thus laying a solid foundation for the province's logistics development.

A comprehensive transport corridoris on its way

Henan is going to build a 米+井+人-shaped comprehensive transport corridor to further enhance its connectivity with the Beijing-Tianjin-Hebei region, the Yangtze River Delta, the Guangdong-Hong Kong-Macao Greater Bay Area, the Chengdu-Chongqing Twin City Economic Circle and other city clusters.

An international corridor for further opening-up has been created. The Aerial Silk Road has basically covered the world's major economies with the "dual hub" strategy (one hub indicates Zhengzhou while the other Luxembourg) stressed. With the coverage of the Land Silk Road expanded, Henan's China-Europe freight trains have been running smoothly with the comprehensive operation index standing at the forefront in China. Henan has expanded the connectivity of the Maritime Silk Road by giving a full play to the role of Zhoukou and Xinyang as bridgeheads for the province's opening-up to the outside world to build river-sea combined transport corridor. With the Online Silk Road upgraded, a new pattern with the coordinated development of Henan's four Silk Roads has been formed. (Chinese source: dahe.cn Text: Shen Hua Translator: Zhao Hanqing and Yang Jiaxin Proofreader: Chen Xingjie)