Experts Explain Cause, Duration of Rainstorms 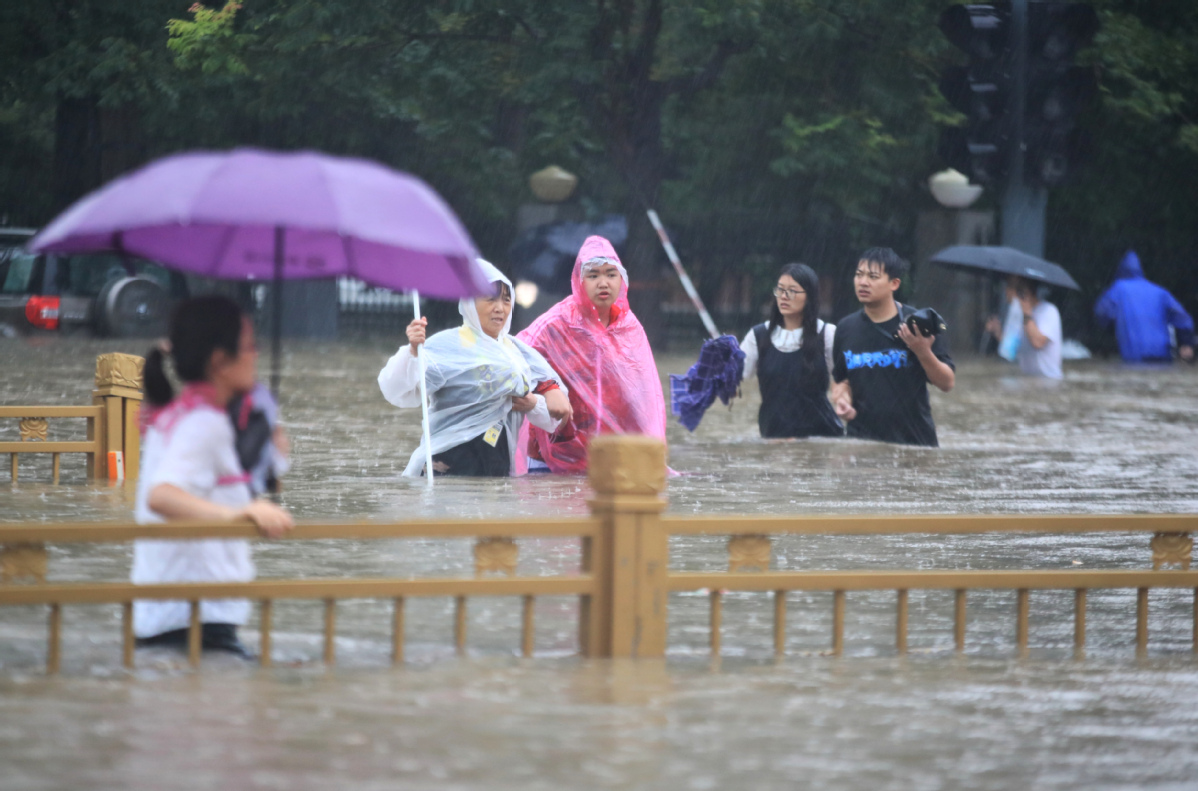 How heavy were the recent rainstorms in Henan?

The cumulative rainfall in the province during the four days was the highest since the province has records, the provincial meteorological service said.

The rain was heaviest in the provincial capital, Zhengzhou, for a short period on Monday and Tuesday. Northern, western and central parts of Henan also experienced downpours, the service said.

Zhengzhou's biggest one-hour precipitation — 201.9 mm between 4 and 5 pm on Tuesday — was also the highest on the Chinese mainland. The previous record was 198.5 mm in the village of Linzhuang in Zhumadian in August 1975, the National Meteorological Center said.

The city's precipitation during the four days exceeded that of its average annual precipitation, the center said.

Why did strong rainstorms hit Henan this time?

"Partly affected by the typhoon, large amounts of water vapor have been transported to China's inland areas, including Henan," he said.

Su Aifang, chief forecaster at the provincial weather service, said the province's Taihang and Funiu mountain ranges facilitated the gathering and rising of the airflow, which caused rainfall zones to remain over western and northwestern parts of Henan.

In addition, small and medium-scale convective weather — the vertical movement of heat and moisture in an unstable atmosphere, especially via updrafts and downdrafts — moved from the Funiu mountains to Zhengzhou, causing strong, continuous rainfall in certain areas, Su said.

How long will the rain last?

From Thursday to Monday, rain was forecast to continue in Henan. However, rainfall will gradually subside in Zhengzhou and the province's northern and central regions, though the storms will increase the risk of mountain torrents and other geological disasters. By Monday, lighter rain is forecast for parts of Henan, the provincial weather service said.

However, local authorities are still urged to be vigilant and prepare to prevent or cope with flooding and other possible disasters.

What is behind such extreme weather?

"We haven't fully understood the rule of extreme weather events and still need to research it," said Chen, chief forecaster at the National Meteorological Center. "Many abnormal factors jointly cause such events, including typhoons and summer rain.

"It is incorrect to say that a certain place like Henan is vulnerable to extreme weather events, or that the events occur at some regular frequency," he added.

Chen also said that talk among netizens that the rain in Henan reached the highest level in a millennium is also improper.

"China started recording meteorological data in 1951, meaning that we only have 70 years' rain data. Also, we don't rate the rain level in this way," he said.

Why is it difficult to forecast extreme weather events?

Predicting such weather events remains a challenge worldwide because it involves many meteorological phenomena, the center said.

"The formation of this kind of extreme weather, including rainstorms and high temperatures, is complex," Chen said. "We still lack effective solutions and methods" for such forecasting, he said.

"We are now putting a lot of effort into tackling the difficulty. We believe that as the technology improves, we can better forecast the events."

Wang Luxi contributed to this story.