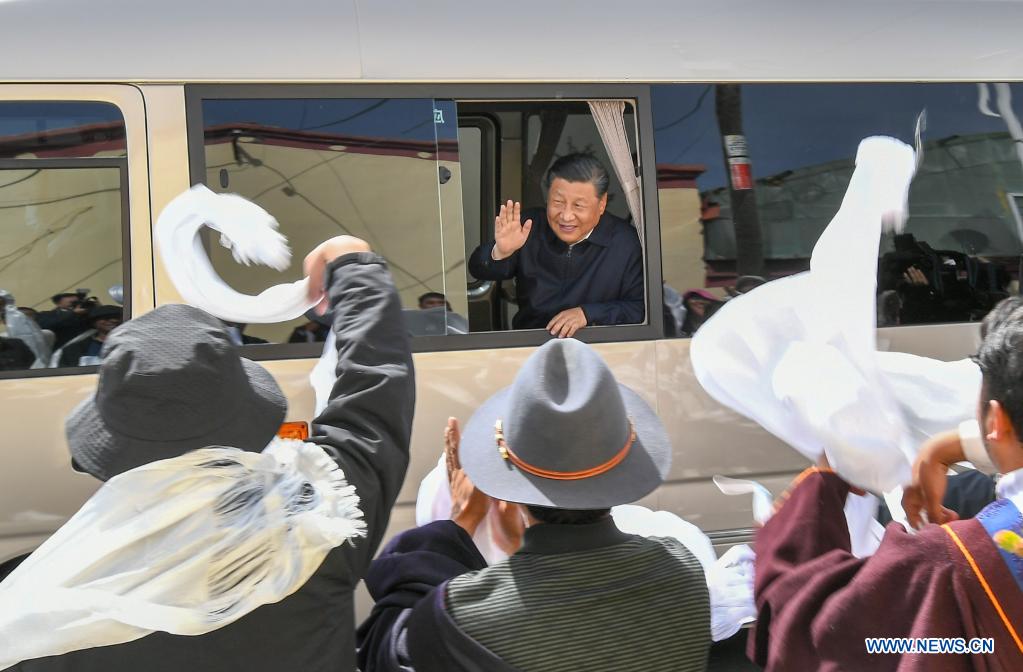 President Xi Jinping, who is also general secretary of the Communist Party of China Central Committee and chairman of the Central Military Commission, waves to local residents after visiting a village in Shaliuhe township in Gangca county of the Haibei Tibetan autonomous prefecture, Qinghai province, on Tuesday. Xi visited the county during his inspection tour of the province. Xie Huanchi/Xinhua

President stresses not a single ethnic group should be left behind

The Communist Party of China has won people's hearts because it always serves the people wholeheartedly and strives for the well-being of all ethnic groups, Xi Jinping, general secretary of the CPC Central Committee, has said.

Xi, who is also the Chinese president and chairman of the Central Military Commission, made the remark on Tuesday when visiting the family of a herdsman in a village in Shaliuhe, a township in Gangca county, during an inspection tour of Qinghai province.

The three-day trip, which concluded on Wednesday, took him to Xining, the provincial capital, and the Haibei Tibetan autonomous prefecture, where he visited an enterprise, an urban community, a rural village and a nature reserve.

Xi was presented with a hada, a piece of white silk used as a greeting gift among Tibetan people, when he entered Sonam Tsering's home on Tuesday afternoon. He chatted with the family members and learned about their livelihood.

Sonam Tsering told Xi that the herdsmen live a happy life thanks to the good policies of the Party, and he extended his gratitude to Xi and the CPC.

Noting that this year marks the centenary of the founding of the CPC, Xi said the achievements the Party has made over the century have enabled it to win people's hearts. As the nation is embarking on a new journey of building a modern socialist country, it will become even better, he added.

Leaving Sonam Tsering's home, Xi was greeted by residents of the village. Xi said to them, "We are a family, and we are all brothers and sisters," and called on them to have confidence in a brighter future. 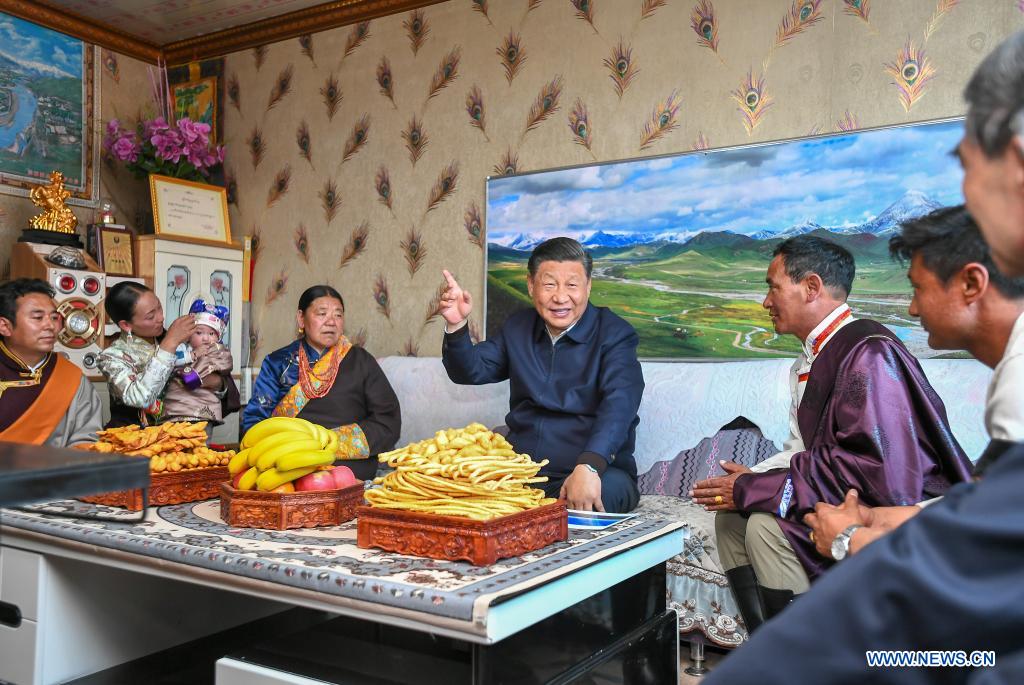 The Chinese nation must stand out more firmly in the world when the People's Republic of China celebrates the centenary of its founding in 2049, Xi said, and a prosperous and modern country must be built up.

Noting that all ethnic groups should be together "like seeds of a pomegranate", he said that not a single ethnic group should be left behind in the nation's efforts to fully build a modern socialist country.

"People's well-being" has been a key phrase in Xi's governance philosophy as he has stressed on many occasions that the CPC upholds people-centered development. Therefore, on his inspection tours nationwide since he became general secretary of the CPC Central Committee in 2012, he has always visited rural villages and urban communities to learn more about people's everyday lives.

Xi has used the inspection tours to learn about the specifics of people's lives wherever he visited, such as housing, education, healthcare, care for the elderly and employment, urging officials to address problems that matter to people's immediate interests.

When he was on an inspection tour of the Guangxi Zhuang autonomous region in April, he told farmers in Maozhushan, a village in Quanzhou county of Guilin, that "people's well-being is what is of vital importance to the nation".

Visiting a farmer's home in Zouzhuang, a village in Xichuan county, during his inspection tour of Henan province in May, Xi said the century-old history of the CPC's struggle is one of seeking happiness for the people.

Also on Tuesday, Xi inspected the achievements made in comprehensively tackling environmental problems and protecting biodiversity at Qinghai Lake.

Xi underlined the importance of conservation, saying that the environment is a "resource, wealth and treasure". 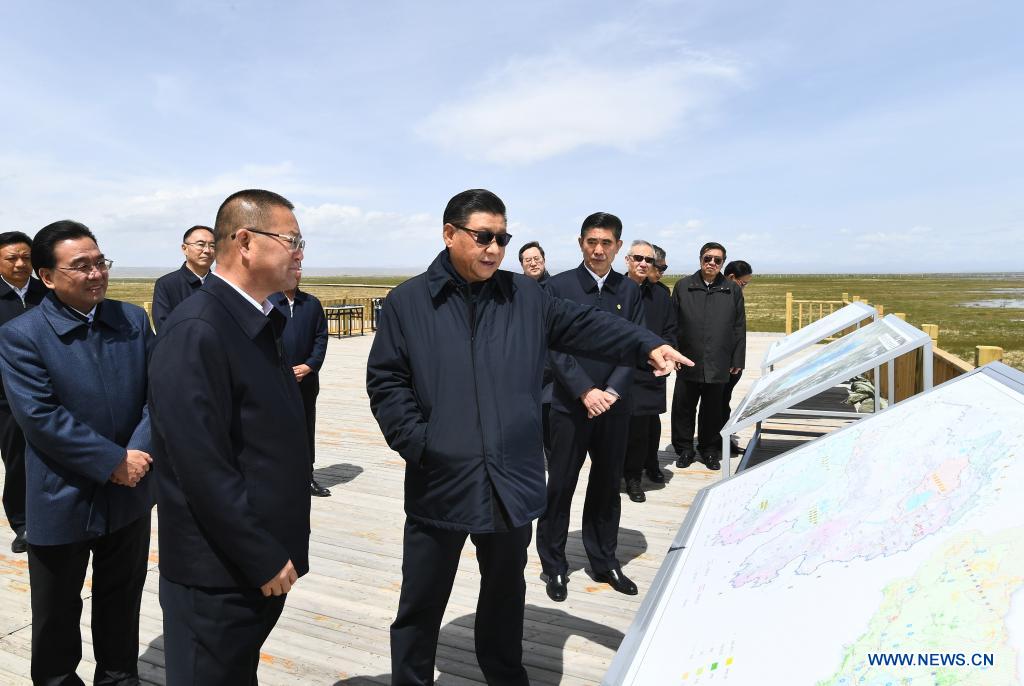 President Xi Jinping, also general secretary of the Communist Party of China Central Committee and chairman of the Central Military Commission, is briefed about the environmental protection efforts in the Qilian Mountains and Qinghai Lake, and inspects achievements made in comprehensively addressing environmental problems and protecting biodiversity at the lake, in Gangcha county of Haibei Tibetan autonomous prefecture, Northwest China's Qinghai province, June 8, 2021. Xi on Tuesday visited Gangcha county during his inspection tour of Qinghai province. [Photo/Xinhua]

Noting that Qinghai is strategically important in building an ecological civilization in which sustainable development is key, Xi urged officials to make all-out efforts to protect ecological resources, implement the national strategy for ecological conservation and build national parks.

Speaking at a meeting attended by senior local officials on Wednesday, Xi underlined the important role of Qinghai in protecting the country's ecological security, national security, and resource and energy security in the new development stage.

He called on the province to stick to low-carbon, green development and blaze a trail for high-quality development with local characteristics.

While implementing the strategic decisions of the CPC Central Committee in promoting the development of the western region and advancing the high-quality construction of the Belt and Road, Xi said that the province should actively integrate itself into the nation's regional development strategy, such as the Yangtze River Economic Belt and the ecological conservation and high-quality development of the Yellow River Basin, in order to drive its economic growth.

He underscored the strategic position of Qinghai in promoting the stability of the Xinjiang Uygur autonomous region and the Tibet autonomous region, as the province is adjacent to both regions. He urged the province to fully carry out the Party's policies to promote ethnic unity and progress, and its guidelines for religious work.