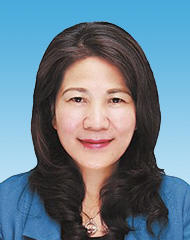 She is responsible for the work on education, science and technology, radio and television, and sports.